In The Shadow Of His Nemesis chapter six 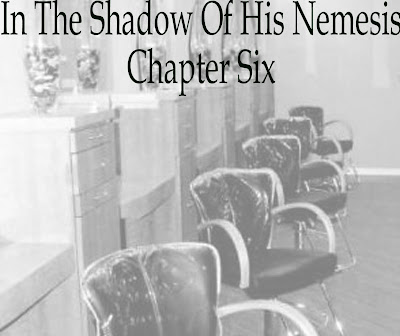 
“I said do you have any duct tape?” Isobel stood in the doorway of the Beautiful You hair salon watching her best friend Cheryl McGlade sweep up wisps of hair.

Cheryl was dour looking with freckles and a severe hairdo; a look of suspicion came easily to her face, “What do you need it for? What’s wrong?”

“For my car window.”

Once the duct tape was in her hand Isobel headed outside and Cheryl followed her. Isobel grimly went about the task of taping a clear plastic garbage bag in place over the broken window. “Can you keep the other end down?” she asked.

“What happened?” Cheryl held down one end of the fluttering plastic, “And aren’t you supposed to be at work?”

“It’s just been…” Isobel trailed off, unsure what to say. A tractor trailer thundered past filling the silence with noise and acrid exhaust.

The trash bag was taped and re-taped until it was stretched and taut; when it was done Isobel handed the remaining roll back to her friend. Cheryl caught her wrist, her tone pleading, “What’s the matter? What could have happened?”

Friendship with Cheryl was the only thing of value Isobel had gained from a disastrous semester of beautician school. That was over two years ago, during what Isobel now thought of as her To-Hell-With-Art-I'm-Gonna-Be-A-Hairdresser phase.

From day one Isobel had been the worst student, and Cheryl the shyest; their friendship began with a pair of borrowed clippers and expanded from between-class bull sessions to bar hopping. They compensated for each other perfectly, Cheryl tried to tutor Isobel on hairdressing and Isobel tried to teach the other woman how to loosen up and have some fun.

By the beginning of the second semester Isobel came to her senses. She forsook hair design and cosmetology returning to her paints and pens. Cheryl had been a bit miffed at first; even going so far as to accuse her newfound friend of abandoning her, but in a month's time she appeared on Isobel's doorstep with an apology.

“Come inside and we can talk about it.” Cheryl said, “I don’t have any customers for an hour and Debbie called out sick.”

“I don’t think…” Isobel sat down on the bumper of her car, her elbows on her knees, her chin in her hands. She glanced at the hair salon, Cheryl's hair salon. Somehow she had gotten an entire business together all on her own. It made Isobel wonder what the Hell she was doing with her life. "I don't know where to begin."

“Is it Nick?” Cheryl asked.

A bitter laugh ringed her reply, "No, it's another guy."

“Another guy?” Cheryl shook her head, “Come inside. I’ll make us some coffee.”

“All right.” Isobel allowed herself to be led back inside the empty beauty parlor.

Sitting on the cigarette-stained old couch in the waiting room and nursing a weak coffee Isobel told the whole bizarre story from beginning to end. Cheryl's jaw dropped a little further with each twist in the tale until finally she said, "You're either crazy or stupid, I don't know which."

Isobel’s head found its way into her hands again, "I know how it sounds."

"Oh, you know how it sounds but I don't think you know how it is!" Cheryl was livid, "Women like you are getting raped and killed every minute by men they know! And you're letting strangers into your bed?"

"You're on the rebound. Nick's got you emotionally screwed up- you'd throw yourself at anybody if it would take the hurt away!"

She knotted and unknotted her fingers in her hair, “Couldn’t it be something else? Just this once?”

Cheryl snorted, “Listen to yourself Isobel.”

“People find love all the time.” Her voice broke, “Why not me?”

Cheryl administered one of her patented comforting hugs. "It's all right." she soothed, her chin resting on Isobel's shoulder, "There's nothing wrong with us. It's them. They come out of the womb ungrateful monsters."

"You don't really think…” Isobel’s had her eyes closed tight, “You don’t think I let a lunatic into my apartment do you?"

"No, I sure he was just your garden variety asshole.” Cheryl said, "But for my own piece of mind I want you to borrow my gun for a few days."